Controllers connect to each other in a process called Peering. Peered Controllers create a redundant, highly available and secure overlay network and share traffic load from the overlay network connected servers. A VNS3 mesh network of peered controllers will automatically handle re-routing of traffic in the case of failover.

UDP 1195-1203 - For tunnels between Controller peers; must be accessible from all peers in a given topology.

VNS3 controller peering involves the following steps for each controller in a topology:

The Peering Setup Page will display the number of Controllers allowed to peer together in your topology as defined by the license file used to configure the Controller.For Controller #1 select “this instance” from drop down, instead of specifying its IP. To be valid, your form must have “this instance” value in one and only one drop-down.

NOTE: Firewall rules added to a specific controller are not automatically synced to other controllers in the peered mesh.

Each step must be taken for each controller in the mesh

In multiple controller topology, you much fetch the topology configuration from the initial controller licensed

For Controller #2 select “this instance” from drop down, instead of specifying its IP. To be valid, your form must have “this instance” value in one and only one dropdown.

When done select Save Changes.

You should then get a status p age showing that this Controller was able to reach the other launched Controller instances. Go to Status page to verify that topology checksum on Controller #1 corresponds to that of Controller #2.

The Runtime Status page displays a summary of all runtime configuration information. 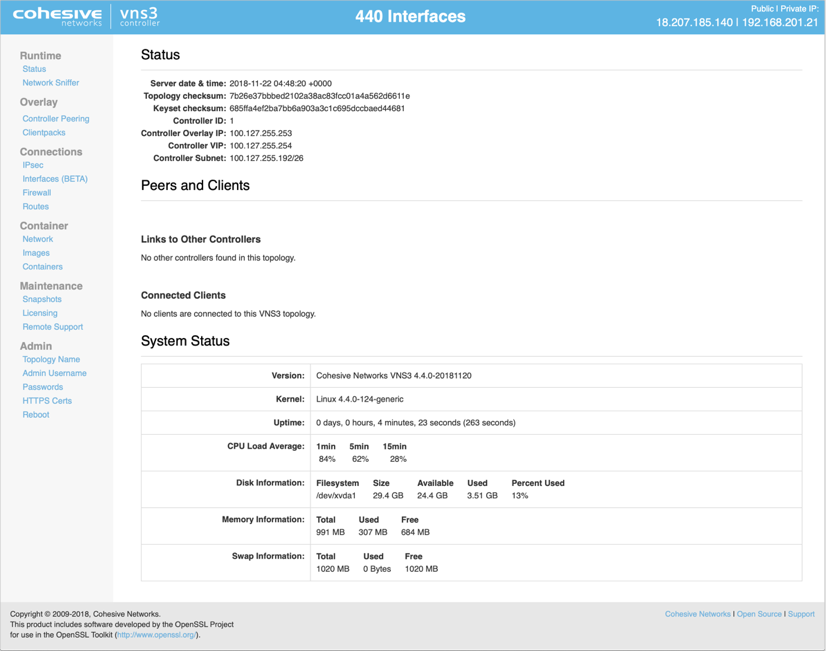 The VNS3 Controller is ready for connections to be added. We recommend starting with configuring any IPsec connections that are needed before connecting client servers via clientpacks.