The VNS3 Firewall adds a layer of security and control for cloud-based deployments.

VNS3 Firewall features are controlled using IPTables syntax. For more information see the official IPtables documentation and look for the PARAMETERS section. Another useful guide is available here from some geeks.

In general, you write a specification of a packet to match and then specify what to do with this packet. These are referred to as “customer” rules and are applied as appropriate in the overall firewall rule structure on the Controller. This means in addition to the standard security and firewall features of VNS3, you can create your own rules to restrict traffic to and through the VNS3 Controller.

The order of rules matter - rules are applied from top to bottom until the first match. If no match is found, the packet is allowed to continue on. Important note: If your customer rules don’t reject a packet, it will be allowed by default.

However, this “default” is fairly restrictive. Traffic is allowed from “known” VLANS. Known VLANs are VLANS that are listed in IPSec tunnel rules, and the VNS3 virtual VLAN. Allowing traffic from other sources requires adding firewall rules to accept that traffic.

NOTE: Firewall rules added to a specific controller are not automatically synced to other controllers in the peered mesh.

VNS3 creates a firewall table for your rules which is implicitly used by any firewall commands you enter. As a result, the firewall syntax varies from standard iptables in that you don’t specify an “append” or “-A”. The chain names for your commands use restricted chain names of INPUT_CUST, OUTPUT_CUST, FORWARD_CUST, PREROUTING_CUST, and POSTROUTING_CUST.

Cohesive also offers a chain MACRO_CUST which is a type of rule that combines some more complicated rule combinations spanning multiple chains and tables into a single rule. For example the full IPTable syntax would be something like:

In VNS3 enter the same elements without the “iptables” command and the “-A”:

Do not have any rules of the following forms:

-j ACCEPT allows a packet. -j DROP drops a packet. -j REJECT sends an appropriate notification to sender saying such and such packet was rejected (depends on protocol). 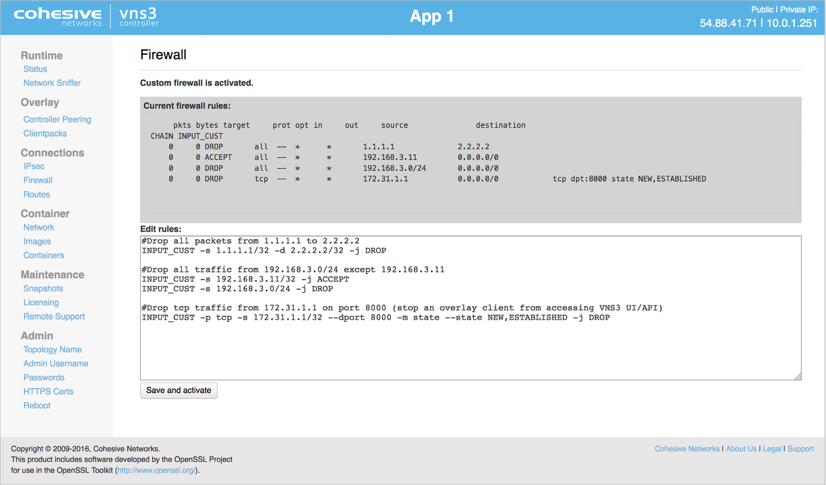 It is now common for clouds to provide VLAN isolation. This provides a critical element of your overall security approach but creates the need for additional capabilities not needed in “plain old EC2”.

One of these is “NATing” which allows the machines in the VLAN to use the VNS3 Controller as a gateway to services on the Internet, with all VLAN machines sharing the Controller’s public IP address. This is the same behavior used in your home or office, where many devices can access the Internet via one shared public ip address.

When a VLAN device accesses the Internet, its return traffic is routed to it. Basically, VNS3 lets you use your cloud VLAN just like you treat your home or office network, isolated from inbound requests for service, but allowing most outbound service requests.

In this example - your VNS3 Controller is in a VLAN subnet with a network from 172.31.1.0-172.31.1.255. Many clouds with VLAN capabilities map a public IP to the private IP on eth0 via DNS. Here we are telling the VNS3 Controller to “masquerade” for traffic coming from that subnet out to the Internet and then return the response packets to the requesting machine.

With a VPC, your cloud servers are not visible or accessible from the Internet unless you assign a public or Elastic IP, “putting” the server on the Internet. What if you want to be able to access one of the machines (for example like you might do on your home network) from the Internet? This is where port forwarding comes in.

A common use case would be using a Windows Remote Desktop on one of your cloud servers, as the “jump” box for then remoting to all the other cloud servers in your VPC. VNS3 lets you do this with your VPC, just like you could for your home or office network, allowing specific traffic, from a specific source, on a specific port to be “forwarded” on to another machine. 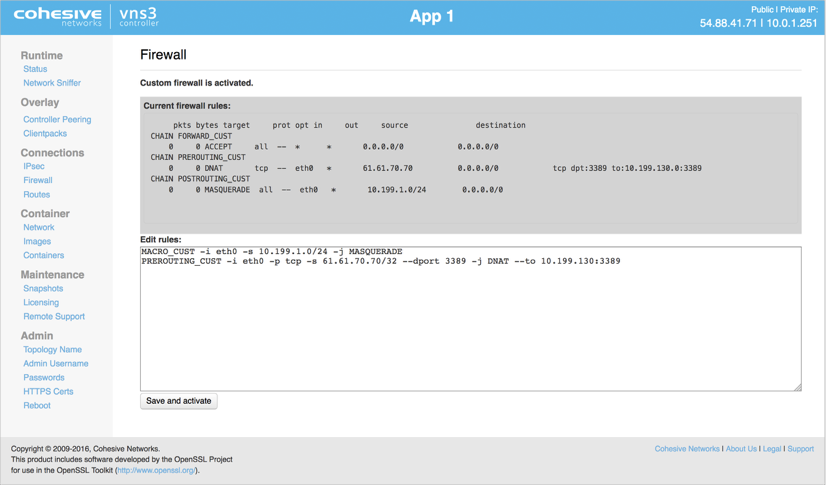 Using the same example network, assuming a source network public IP of 69.69.70.70 from which the RDP client is running, do the following:

Netmapping allows you to create IPsec tunnels to imaginary IPs on the VNS3 side of the connection and use the VNS3 firewall to map all traffic to/from the imaginary IP, to the actual host on your cloud side. This is extremely useful in situations where a connecting party has an address overlap with your Overlay or VLAN subnet.

If the Local Subnet is a VLAN and not the Overlay Subnet add the following forward rule:

Firewall - Copy Traffic to a Device

With the addition of the application container system there are scenarios where you might want to push a copy of the traffic from the eth0 or tun0 VNS3 interface to a particular IP. The obvious use-case is copying traffic to the Cohesive Utilities Container where you can do things like run tcpdump or iftop.

Example: I want to copy all tun0 (Overlay Network) traffic to my Network Utils Container running on the VNS3 Controller on the Docker network at 172.0.10.2.

NOTE: At this time analyze inbound OR outbound at any given time in order to prevent accidental traffic loops. It IS POSSIBLE to create a traffic cycle which could “brick” your controller if you create simultaneous inbound AND outbound rules with improper parameters.