This guide describes how to get your VNS3 PeopleVPN launch configured and connected to remote users in 5 steps.

We highly recommend associating a static public IP or Elastic IP to your VNS3 PeopleVPN controller instance. This provides flexibility in the event you need to upgrade or if there is an underlying cloud failure.

NOTE: If you add the static IP after the VNS3 PeopleVPN is launched, reboot the instance via the UI and access the UI via the newly associated static public IP.

VNS3 PeopleVPN comes with free forum support that is provided on a best effort basis.

At Cohesive Networks we pride ourselves on the quality support we provide to our users and customers. We want to make sure you have all the materials to be independently successful with VNS3. In cases where you do need help, don’t hesitate to create a forum post and a member of our Support Team will respond.

If you need additional support outside of the capabilities provided by our free forum, we are of course happy to help but a commercial agreement may be needed. Feel free to contact us and we can review our premium Support Plans.

In the event Cohesive needs to observe runtime state of a VNS3 Controller in response to a tech support request, we will ask you to open Security Group access to TCP port 22 (SSH) from our support IP, 54.236.197.84, and Enable Remote Support via the Web UI.

Note that TCP 22 (ssh) is not required for normal operations.

Each VNS3 Controller is running a restricted SSH daemon, with access limited only to Cohesive for debugging purposes controlled by the user via the Remote Support toggle and key exchange generation.

Cohesive will send you an encrypted passphrase to generate a private key used by Cohesive Support staff to access your Controller. Access to the restricted SSH daemon is completely controlled by the user. Once the support ticket has been closed you can disable remote support access and invalidate the access key. 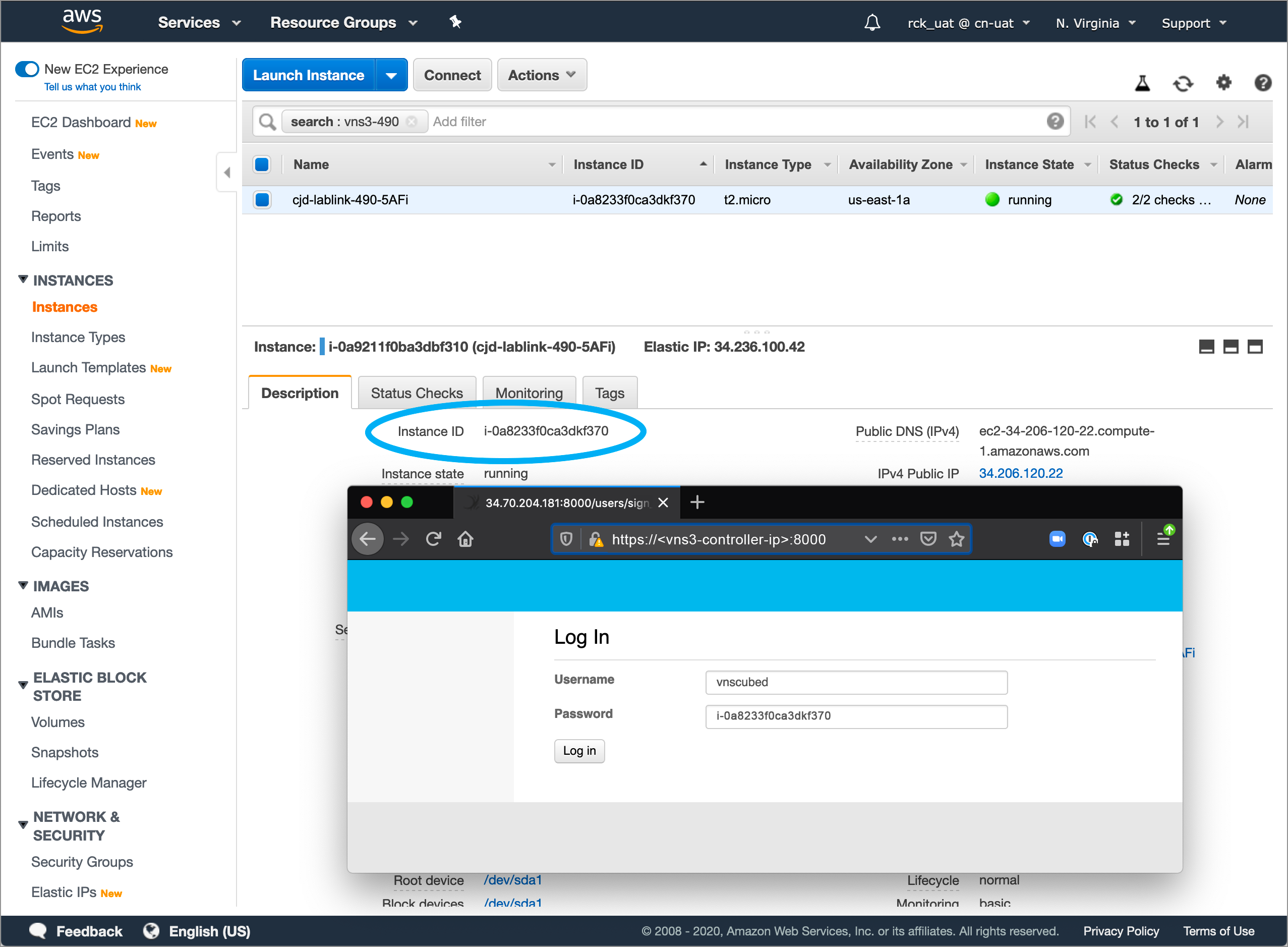 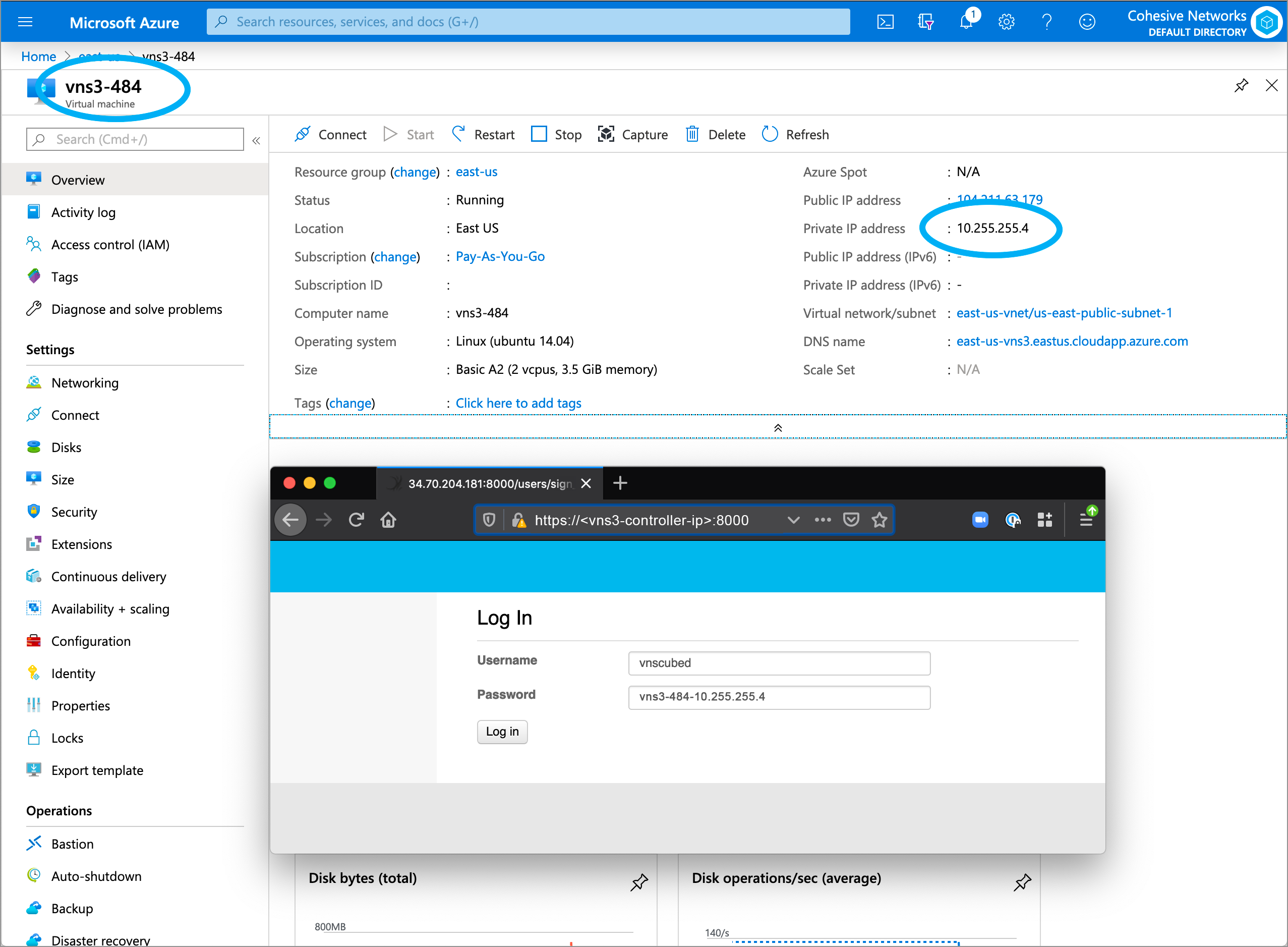 Reset your passwords: Reset the Web UI Password - Even though the instance id is unlikely to be “guessed”, please change it for security purposes. Reset the API Password. Making it a different password than the web interface is probably best.

NOTE: Your VNS3 Controller answers to API calls on the same port 8000 as the web interface runs on. Ideally make a separate password for the API usage against the Controller.

Cohesive does not have any key access or remote access to your VNS3 Controllers unless provided by you. If you forget these passwords we cannot recover them for you but in AWS you can recover via User Data.

The VNS3 Overlay Network is the enabling feature for remote-access VPN. The Overlay Network is made up of a set of cryptographic keys (uniquely generated on your VNS3 PeopleVPN instance) that are tied to a specific IP address in the Overlay Network Subnet - 100.127.255.0/24 default. Clientpacks are distributed to the remote devices and used with an OpenVPN client (TLS client) to make an encrypted connection back to the VNS3 PeopleVPN controller instance. Communication to other remote-access VPN devices, local cloud CIDR, remote networks, and public Internet can also be optionally routed through VNS3 PeopleVPN depending on your use-case.

In situations where a different Overlay Network is desired follow the steps outlined in the Reset Defaults section of this guide.

NOTE: Routes to the Overlay Network are pushed automatically by default.

There are two types of routes:

To add connectivity to your cloud network, create a route advertisement and specify the VPC or VNET CIDR: 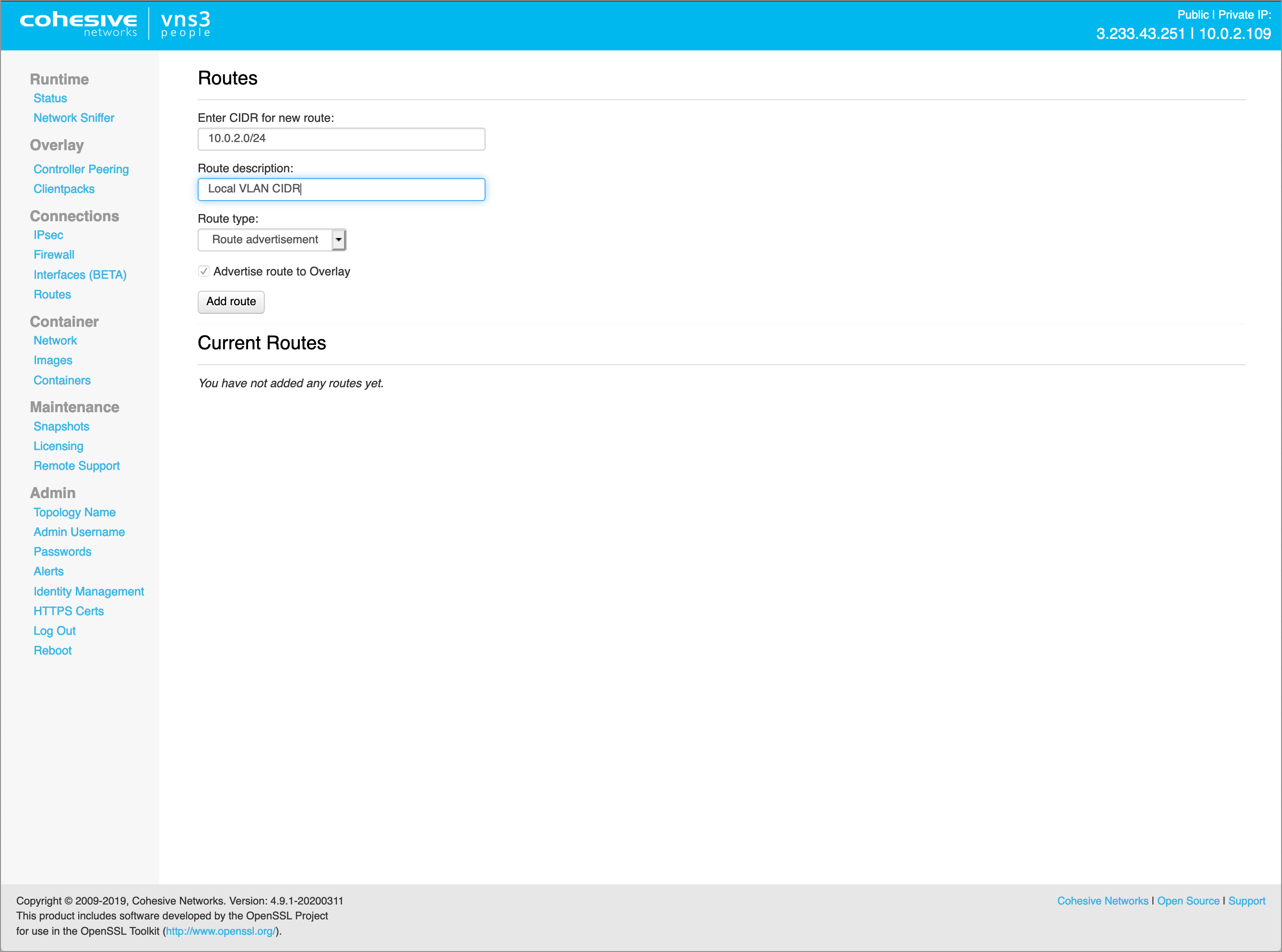 NOTE: Add routes before setting up client configurations as OpenVPN only pushes routes during initial client connect. Cohesive Networks does have a Routing Agent that is available for dynamic route updates to remote access clients.

The VNS3 firewall allows users complete control of the INPUT, OUTPUT, FORWARDING, PREROUTING and POSTROUTING behavior of traffic as it first enters and as it exits the VNS3 PeopleVPN controller.

Below are some example firewall rules common to this remote access use-case. 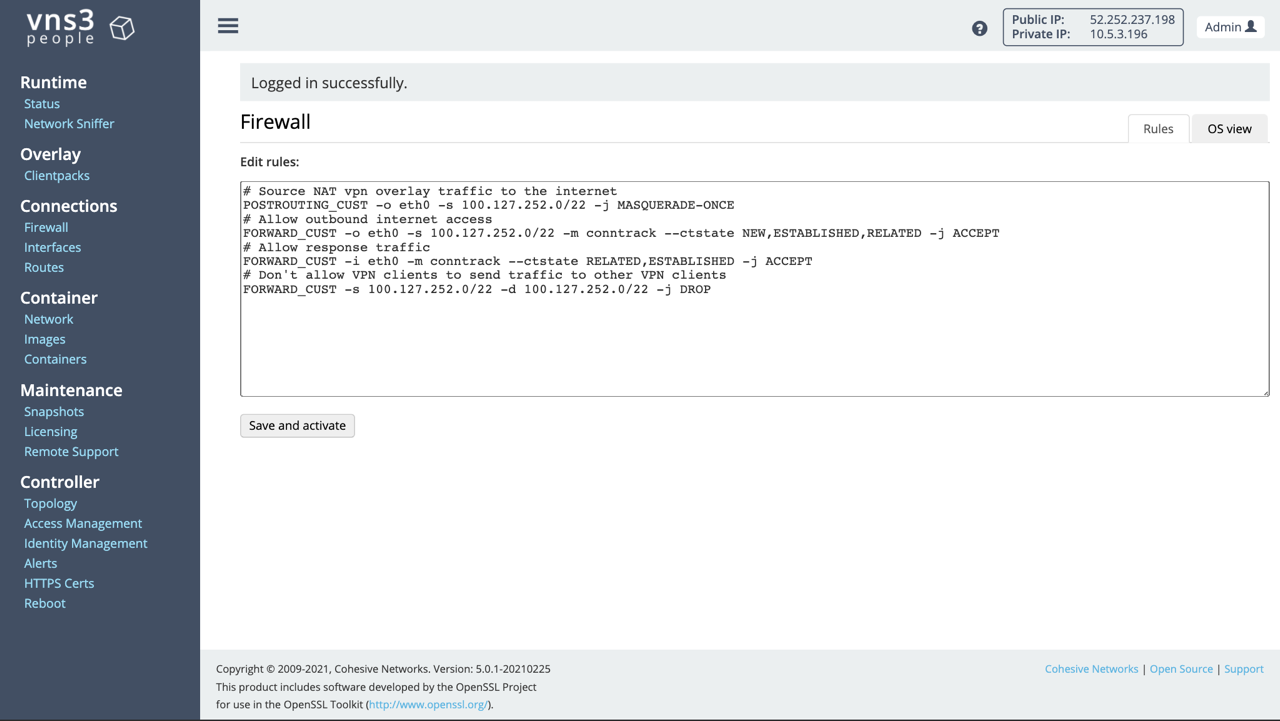 In order to connect client devices to the Overlay Network for remote-access VPN, the remote device will need a Clientpack file and an OpenVPN client.

The Clientpacks page displays all the available Clientpacks in a table displayed below the global options. Clientpacks are named for their Overlay Network IP association.

Select a Clientpack and send the credential to the remote user. 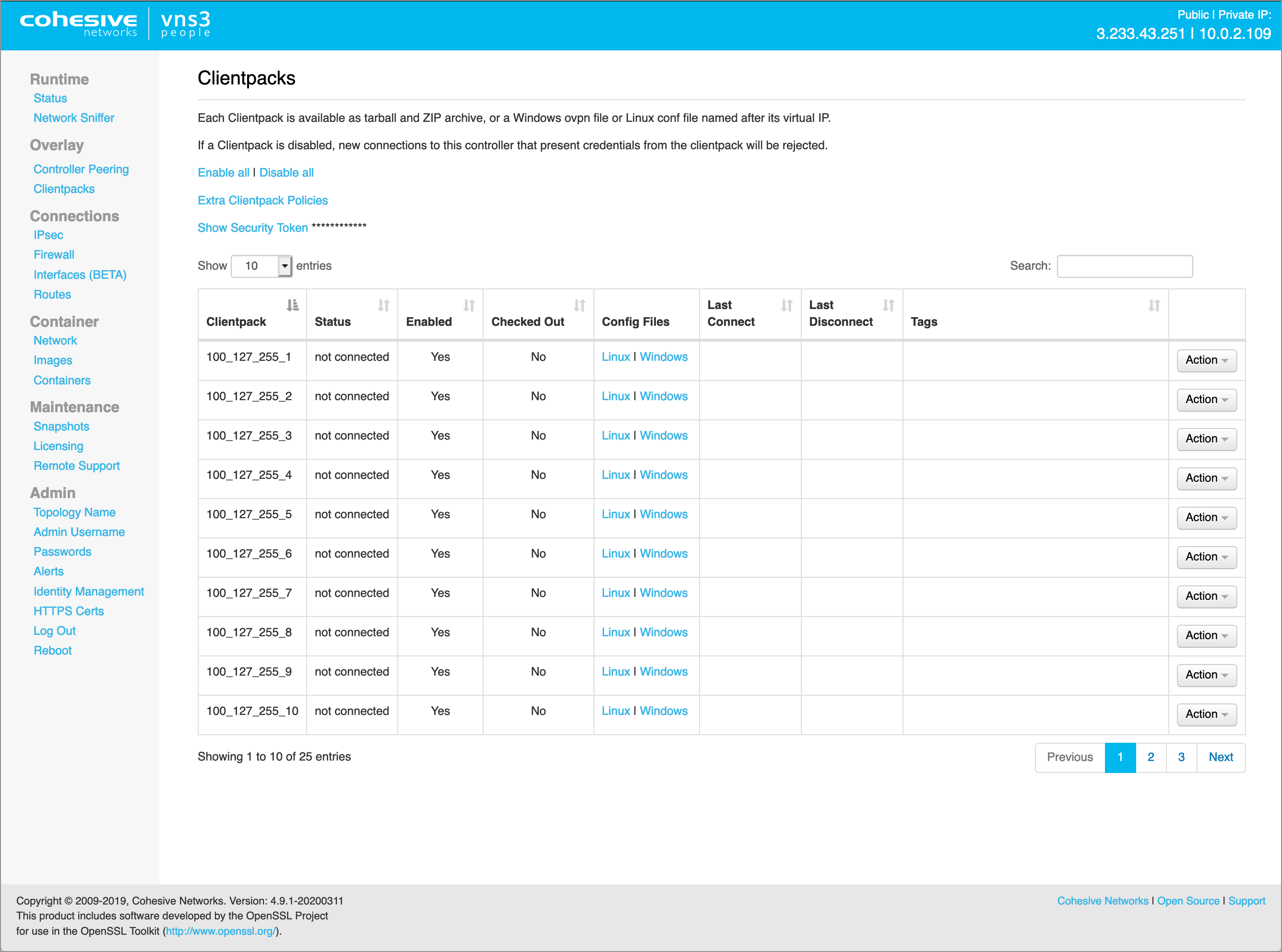 Install any OpenVPN client software on the remote device. We like Viscosity, it is high quality and reasonably priced. You can also use the OpenVPN Community client free of charge.

WARNING: If you accidentally give the same client credentials to 2 different devices you will notice the two clients popping off and on the overlay network inside the VNS3 Controller Status screen. Only one device can have a set of credentials in the same topology at a time.

Once connected, your Windows client will get a TUN/TAP interface with the virtual IP address that corresponds to the clientpack it received.

Adjust local firewall on the client if necessary.

Once connected, your OSX client will get a TUN interface with the virtual IP address that corresponds to the clientpack it received.

Your Linux client will get a TUN interface with the virtual IP address that corresponds to the clientpack it received.

Adjust local firewall on the client if necessary (on Linux, your tunnel device name will be tun0).

Once remote access users connect to the Overlay, the VNS3 PeopleVPN Runtime Status page will display the connections. 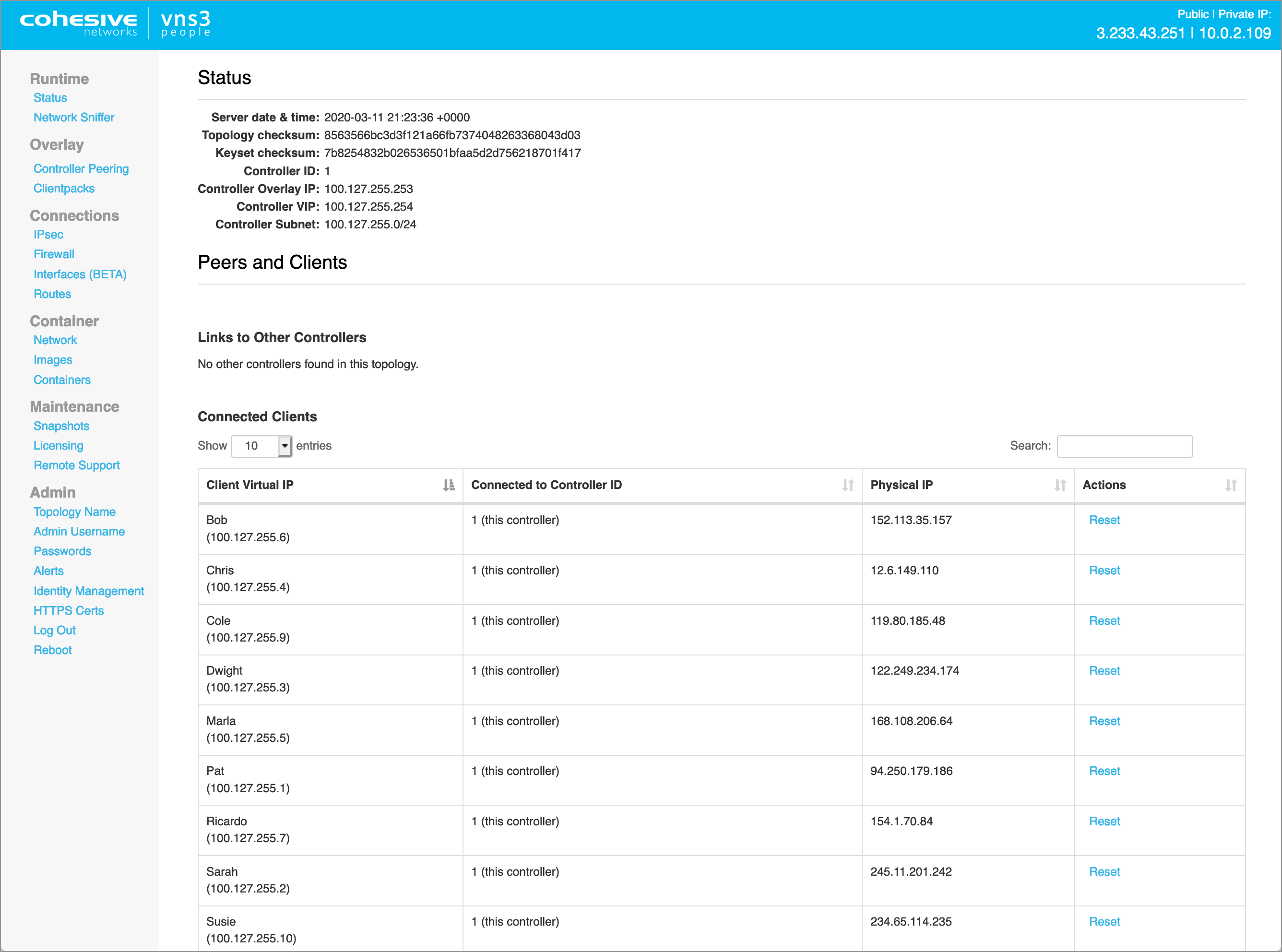 There are several broad operations at the top of the page, which have an impact beyond the individual operations allowed on each clientpack below via the “Action” menus.

Enable all | Disable all

Selecting one of these options will change the clientpack state for ALL client packs in the topology - even if connected to other controllers.

NOTE: This value was previously hidden and required Cohesive to recover from a controller. Toggling this link will show the security token/passphrase used when the clientpack generation was done - using the “Generate New” option in initial controller configuration. This value, combined with cloud security group settings, and VNS3 licensing allows a controller to join this topology.

Config Files Clientpacks are available as a single configuration file optimized for Linux (vnscubed.conf) and Windows (vnscubed.ovpn). These files have the certificates and keys needed for connecting to the Controller embedded within them.

From the Clientpack Page click on the Action menu for a particular credential to see the available actions that can be taken. 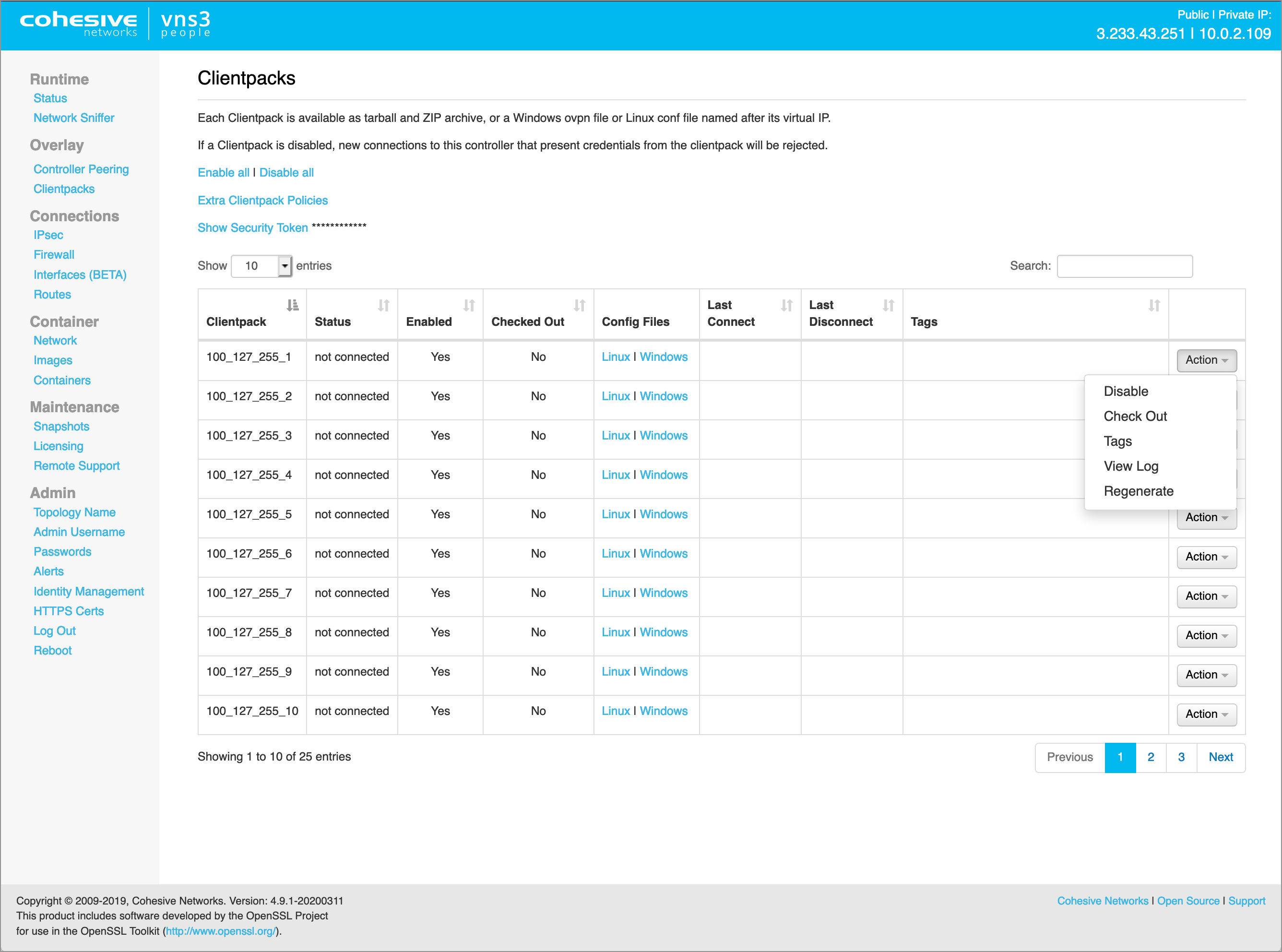 Clientpack policies are applied to the configuration files on the controller where specified. Changes DO NOT propagate (yet) to already deployed/connected clientpacks.

PROS: This mechanism opens up some of the features for customizing connectivity from clients to the embedded OpenVPN servers used in VNS3 for machine-to-machine encryption.

CONS: The parameters are specific the OpenVPN server, and as such won’t “map” as we add IPsec client support, and Wireguard support for machine-to-machine encryption.

Here are some example use-cases/parameters for clientpack policies. NOTE: all of those are available via clientpack customization upon deployment outside the VNS3 controller and have been used by many customers for years.

float - this value allows you to assign a secondary private IP to the VNS3 “Local Private IP” setting, and allow clientpacks within the same VPC to connect on that private IP alias.

remote mydnsname.my.domain 1194 Customers might put the VNS3 controller in their own DNS, Public DNS, Cloud DNS and want to configure clientpacks to use that identifier. This would most likely be combined with removing the “### default” markers from the policy configuration.

This makes use of the OpenVPN client parameter dhcp-option allowing common network parameters gotten from the network to also be retrieved for use in the encrypted overlay network.

The PeopleVPN has several default elements added to Clientpack Policies.
The default DNS server sent to the VPN clients is the Cloudflare 1.1.1.1 resolver.
Also, there is a setting “redirect-gateway def1” - this is OpenVPN client configuration to tunnel all traffic through the VPN. If you would like to change these by default - edit the clientpack policies via the link on the Clientpacks page BEFORE distributing clientpacks to VPN users. Subsequent changes are NOT automatically sent to client machines. Those same edits would need to be made by VPN users on their hosts. (NOTE: There are strategies for automating clientpack deployment and distributing updates, but that requires more elements than are covered here.)

This image shows the default clientpack policies entries (your “remote” line address should be the Public IP of your PeopleVPN controller).

There are some situations where you will need to use a different Overlay Networks address space for your specific use-case. Reasons could include but are not limited to, using a specific CIDR that fits with your organizational internal/external addressing requirements or increasing the size of the Overlay Network for growth future proofing.

This OPTIONAL section outlines the steps required when the preconfigured Overlay Network subnet needs to be changed.

On the resulting page enter the code displayed to validate the reset and click Reset.

After Reboot, the Controller is reset and you can choose how to configure starting with Initialization.

The resulting screen allows you to choose the VNS3 Overlay Network to be used by your cloud-based client servers. Click the Custom Radio button to specify a custom subnet range.

The required fields are:

Once you complete this step, the Controller instance will reboot itself and will come up with your specified topology enabled and running. 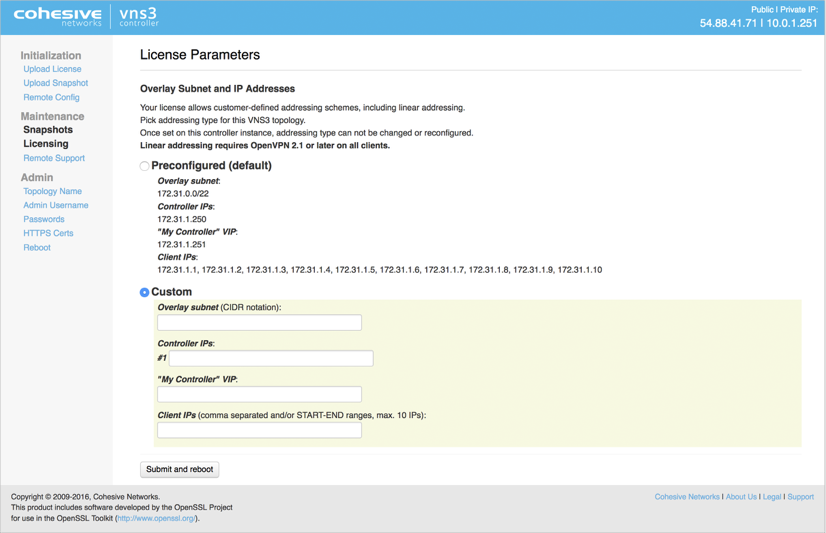 The first step in Controller configuration is to generate the X.509 cryptographic keys associated with each Overlay Network IP called clientpacks. The clientpacks are used along with an SSL client (OpenVPN is recommended) to connect a client server to the Overlay Network using a specific IP address over an encrypted SSL tunnel. Click Generate New under Overlay in the left column.

During key generation you can specify a Topology name to be displayed in the Controller UI for a given set of peered Controllers. This can be changed at anytime by clicking on the Topology Name under Admin in the left column menu.

Also specify a security token. This can be anything but record this for future use as Controller peering and configuration fetching will require you to enter this again.

Click Generate keys link. Key generator will be started in the background, and you can refresh screen to observe progress.

NOTE: Firewall rules added to a specific controller are not automatically synced to other controllers in the peered mesh. Click Controller Peering under Overlay.

The Peering Setup Page will display the number of Controllers allowed to peer together in your topology as defined by the license file used to configure the Controller.

For Controller #1 select “this instance” from drop down, instead of specifying its IP. To be valid, your form must have “this instance” value in one and only one drop-down.

If your topology has unused Controllers, leave the extra fields set to “not set”.

If you have a multiple Controller topology, enter the Public DNS address of the second Controller for Controller #2. Repeat this for each additional Controller in your topology.

When done select Save Changes.