This is assuming the following architecture: You have 2 VNS3 controllers that are running in a peered configuration. This diagram shows 4 controllers, a primary/secondary pair running on either side of a multi-cloud bridge. 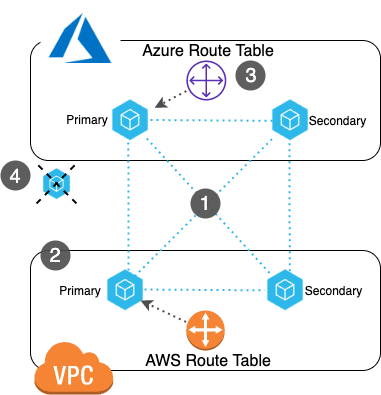 The Plugin Manager is an alpha feature that allows easier management of your plugins via the VNS3 Console.

The VNS3 controller will require certain cloud permissions to be able to update the cloud route tables.

The configuration file is located at /opt/hacontainer/conf/vars.yml and should be in yaml format. Here is an example of a secondary mode config file:

Configuring via the Environment

You can also configure the HA plugin via the environment by capitalizing the variable and prepending with HAENV_. For example, a primary controller’s environment could be configured with the following environment:

Tip: For more verbose logging you can set log level to debug with the variable log_level. Or via the environment with HAENV_LOG_LEVEL=debug

The HA Plugin requires network access such that it can send requests to the environment’s cloud API. Here are the routes and rules required:

Ok, lets run through a quick example. Let’s say you have a network with the following attributes:

Here’s what we need in the cloud route and network security groups:

We need to extend the VPC network to your HA plugins. This will require 2 steps:

It is generally good to add locking routes to the local subnet gateway for your VNS3 controllers’ IPs. The local gateway is always the subnet CIDR + 1. So lets add routes on the secondary VNS3 in subnet 10.0.0.128/25. They will look like this:

Finally, we need to add a lock-down route for the DNS server because the secondary controller is in a subnet different from the DNS server. That route will look like this as the DNS server will be at the VPC CIDR + 2:

The firewall is pretty simple. Here’s what it would look like on the secondary controller:

These rules do the following:

And that’s it! But you should only ever have to do this once. This configuration can be totally automated when deploying new network segments.

The API endpoints you would use are the following:

Have any questions? Contact Cohesive Networks support. We take pride in responding quickly.