Docker offers a different granularity of virtualization that allows for greater isolation between applications.

VNS3 instance sizes have always been a factor in determining to network performance of the Overlay (customer’s edge connectivity, customer’s router config and geo/network distance being the other factors). Throughput is dependent on the instance’s access to underlying hardware (more specifically the NIC). The fewer virtual workloads competing for those hardware resources, the better the performance. As you increase the size of the VNS3 instances you increase the total throughput.

Now that Docker is running as part of VNS3 the Controller’s instance size will also determine how many Docker application containers can run in your Controller. The type and process loads of the containers will be the determining factor. We recommend using c5.large instance size for VNS3 Controllers.

To start using the Container System you must first setup an internal subnet where your containers will run. The default VNS3 container subnet is 198.51.100.0/28. VNS3 allows you to choose a custom address block. Make sure it will not overlap with the Overlay Subnet or any subnets you plan on connecting to VNS3. The container subnet can be thought of as a VLAN segment bridged to the VNS3 Controller’s public network interface.

Click Set once validation is passed. You will prompted with a popup warning that a Container Network change will require a restart of any running container. Click OK.

VNS3 supports uploading a compressed archive of a Container Image, Dockerfile or Docker Context Directory. In the future we will support pulling Containers from the public Docker Index and private repositories.

Container Images are used to launch Containers. You can think of this relationship as similar to an AMI and Instance in AWS. Once an Image is uploaded you can launch one or multiple Containers from the Image.

Dockerfiles are a representation of a Container image, basically a map of how to build an image - start from a source image and run a number of commands on that image before finalizing the Container Image. See the Dockerfile Reference Document for more information.

Cohesive Networks provides a number of Containers and Dockerfiles to help get you started on our Product Resources page.

To Upload a Container Image click on the Images left column menu item listed under the Container heading. 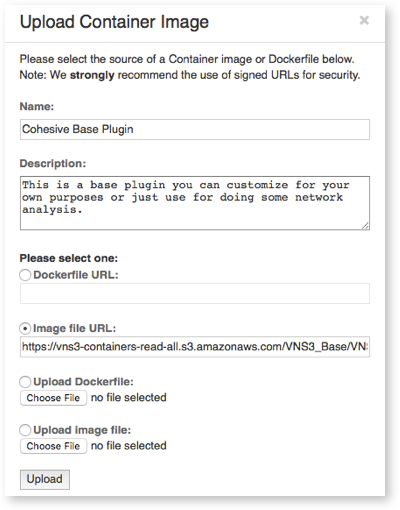 On the resulting Upload Container Image window enter the following:

Once the Container Image has finished the import process, you will be able to use the action button to edit and delete the Image or allocate (launch) a Container.

Uploading from Dockerfile or Docker Context

To Upload a Dockerfile click on the Images left column menu item listed under the Container heading. 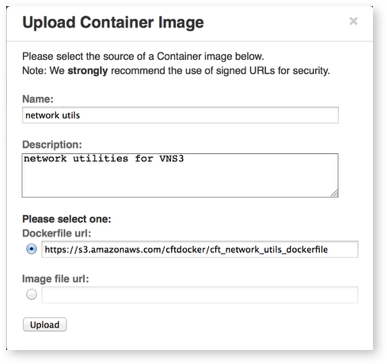 On the resulting Upload Container Image Window enter the following;

Once the Dockerfile has been uploaded and the image has has finished the build process, you will be able to use the action button to edit and delete the Image or allocate (launch) a Container.

To launch a Container click the Actions drop down button next to the Container Image you want to use and click Allocate. 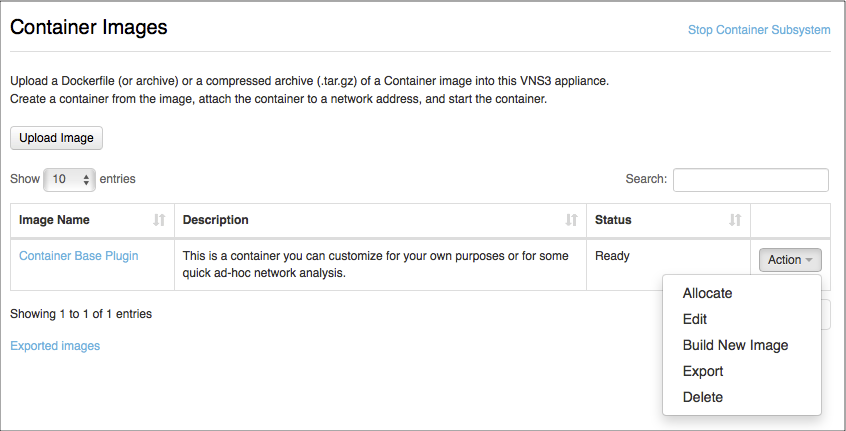 On the resulting pop up window enter the following: 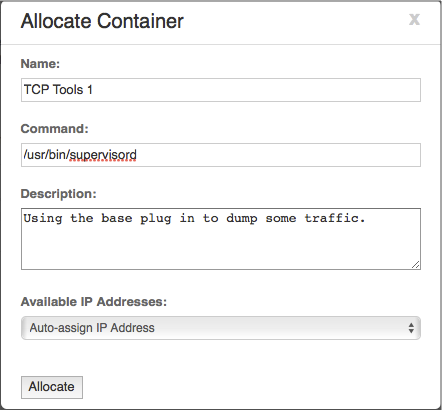 Saving a Container as an Image

This operation saves the state of the current running container in image form for re-use or export for download. What is saved is an gzipped raw file image, from which a new container can be allocated. 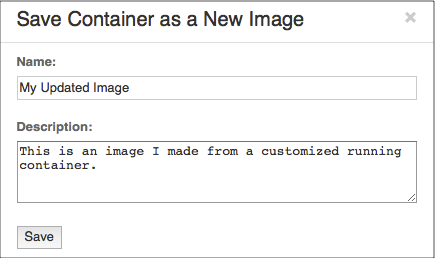 NOTE: VNS3 does not currently support the Docker “commit” command which will push your changes back to a source DockerHub. Nor does it support Docker “export” command which delivers a full delta history of the container as opposed to just a raw image.

This operation allows you to package a running container for download from the VNS3 Controller.

After executing this operation the image will show in uncompressed form on the page available via the “Exported Images” link below the Images table on the Images page.

NOTE: VNS3 does not currently support the Docker “commit” command which will push your changes back to a source DockerHub. Nor does it support Docker “export” command which delivers a full delta history of the container as opposed to a single LXC image.

Once the Container has launched, an IP address included in the specified Container Network CIDR will be listed. Accessing the Container depends on the source network. The following pages cover connection considerations when trying to access a VNS3 Container from the public Internet, Overlay Network, and Remote IPsec Subnet.

Accessing a Container from the Public Internet will require additions to the inbound hypervisor firewall rules with the VNS3 Controller as well as VNS3 Firewall.

The following example shows how to access a plugin running as a Container listening on port 22. Since VNS3 uses uses port 22 and has it blocked by default you will need to re-direct from another port, in this example port 44. 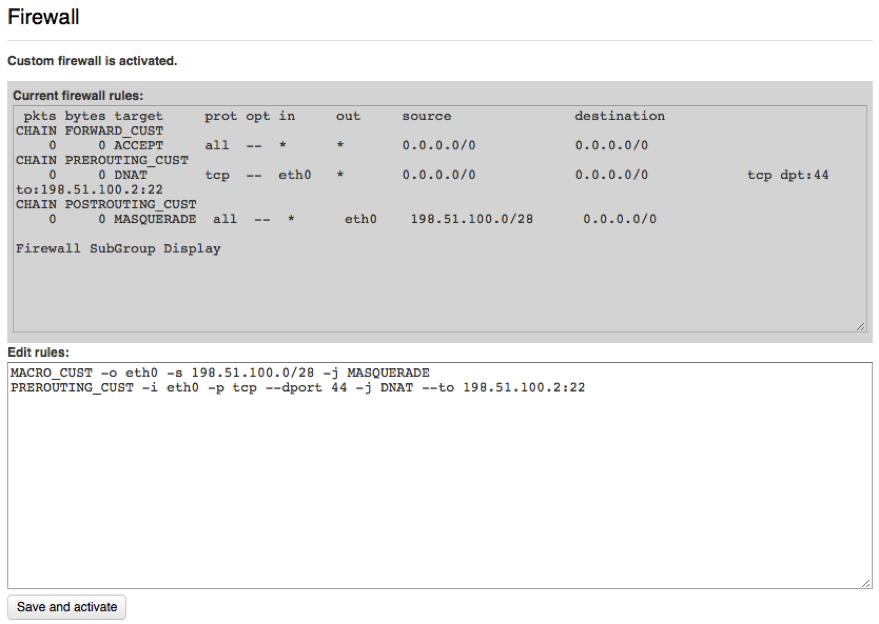 Accessing a Container from the Overlay Network does not require any Network Firewall/Security Group or VNS3 Firewall rule additions.

Accessing a Container from a remote subnet advertised behind an IPsec tunnel will either require an existing tunnel to the VNS3 Overlay Network PLUS some VNS3 forwarding firewall rules OR a tunnel negotiated between the remote subnet and the Container Network.

If you have an existing tunnel to the VNS3 Overlay Network, you can add a few VNS3 firewall forwarding rules to access any Containers you have launched. Enter rules to port forward incoming traffic to the Container Network and Masquerade outgoing traffic off the VNS3 Manger’s public network interface.