This guide describes the basic steps to setup an AWS VPC where you plan on running a VNS3 controller and AWS instances for your cloud use-case. A simple deployment scenario is presented with some best practice pointers. For more complex deployments please open a support ticket via the Cohesive Networks Support Site or email to support@cohesive.net.

You have an AWS account that Cohesive can use for enabling your access to the VNS3 Controller AMIs (via DevPay, AWS Marketplace, or private Image permissions).

In order to be interoperable with other data centers via IPsec, VNS3 supports a wide range of systems and standards.

VNS3 Controller instances use the following TCP and UDP ports:

*VNS3:vpn and VNS3:net Lite Edition will not require UDP ports 1195-1197 access as it is not licensed for Controller Peering.
_** Some public cloud providers require IPsec connections to use NAT-Traversal encapsulation on UDP port 4500_

VNS3 requires an Overlay Network subnet to be specified as part of the configuration process. Use of the Overlay Network is optional but provides improvements in security, address mobility, and performance. Your VPC CIDR and Subnets cannot not overlap with the VNS3 Overlay Network Subnet.

AWS VPC does allow virtual machine instances to act as networks gateways for unencrypted VPC traffic. Routing traffic from the unencrypted VPC instead of using the encrypted Overlay Network requires configuring the AWS Routing Tables and disabling the Source/Destination Check on the VNS3 instance.

See the unencrypted VPC section at the end of the document for more details on configuration.

AWS VPCs provide an isolated address space within the Amazon cloud where you run your instances. VPCs allow you to define Subnet address spaces, and associated Security Groups/ACLs allow control of access control policies via the hypervisor firewall.

Cohesive Networks recommends creating a separate VPC Subnet for the VNS3 Controllers that is different from the subnet or subnets defined for the application instances.

Cohesive Networks typically recommends configuring a small subnet at the top of the VPC CIDR for the VNS3 Controller(s). You can then logically segment the lower part of the subnet for your application instances in a single subnet or multiple subnets per instance role (e.g. web server, app server, db, etc.)

Create a VPC From the VPC Wizard

Create a VPC from the VPC tab at the top of the AWS Console.

Choose either VPC with a Single Public Subnet Only or VPC with Public and Private Subnets. The other two choices will not work with VNS3.

For this example we choose VPC with a Single Public Subnet Only.

Remember the VPC CIDR and VPC Subnets must not overlap with the VNS3 Overlay Network Subnet.

NOTE: More complex VPC deployments can be set up (more than one VPC Subnet inside a VPC CIDR) but the VNS3 Controller must be launched in a Public VPC Subnet.

Click Network ACLs in the left column menu under the SECURITY section.

Select the ACL created by the VPC Wizard.

The default settings allow all ports on all protocols from all destinations for both inbound and outbound connections. This due to our selection of a Public Subnet when setting up the VPC. It is recommended you leave the ACLs open during initial configuration of your deployment. Once all connections are established and tested you can lock down the ACL based on the Firewall Considerations outlined on page 7 by deleting the default Rule #100 and adding specific ALLOW rules. 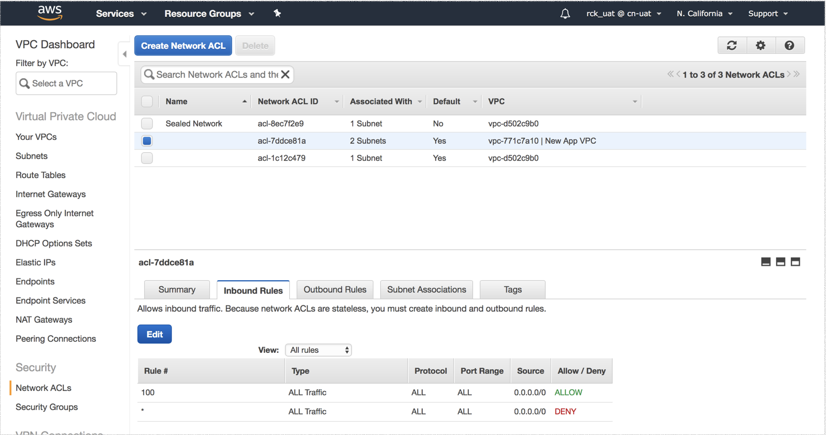 From the Inbound tab, click Edit to update the following exceptions: 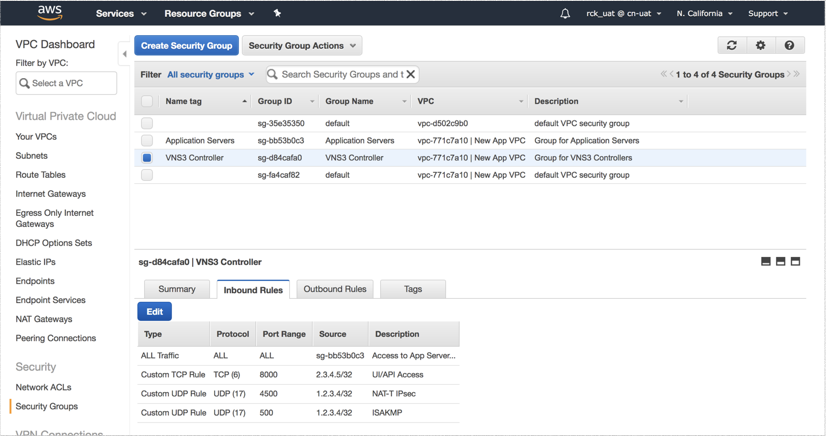 An alternative to just using the default security group setup by the VPC wizard is to separate the Controllers from the Client Servers. To do this we recommend creating two groups inside the already created VPC: vns3-mgr and vns3-client. Note: no rules are needed in the vns3-client group by default.

Select the vns3-mgr group to Edit the following inbound exceptions: 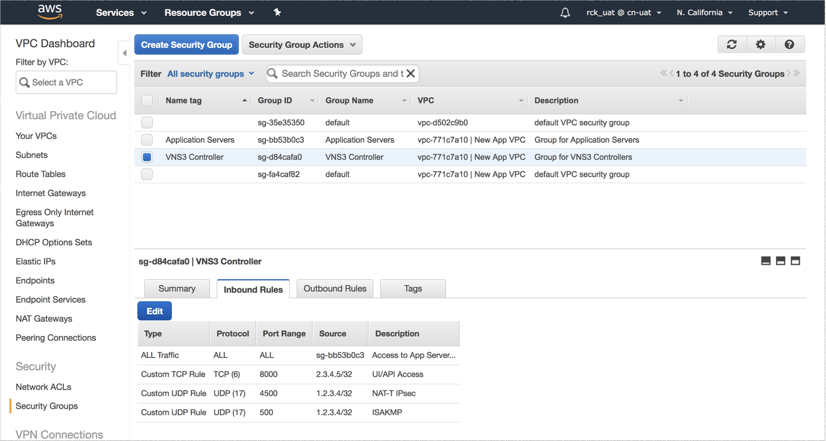 Switch to the EC2 tab at the top of the AWS Console.

Click AMIs in the left column menu under the IMAGES section.

Be sure to launch the Instance in the VPC and the VPC security group that was created using the VPC Wizard.

NOTE: On Step 3, Configure Instance Details, in the Launch Wizard you can specify a particular IP Address for the Controller Instance on the VPC Subnet that was created using the VPC Wizard. AWS will automatically assign an IP inside the VPC Subnet if this field is left blank (as we did for this example). 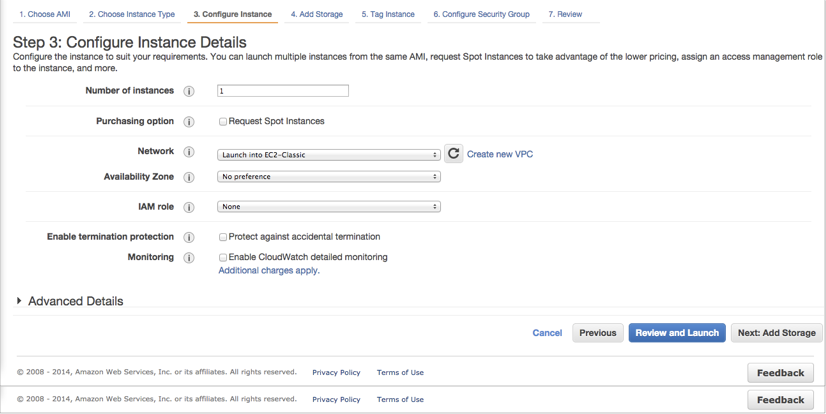 Switch back to the VPC tab at the top of the AWS Console.

Click Elastic IPs in the left column menu under the Network & Security section.

Click Allocate New Address and select the Elastic IP be used in VPC.

Associating an Elastic IP with your VNS3 Controller Instance will make the instance publicly available so you can log into the Controller Web UI to configure your Overlay Network and setup IPsec connections.

In the event you choose to not use the Overlay Network, there are some additional steps required to allow VNS3 to act as the gateway for the VPC Subnet(s).

Remember even if you decide not to use the Overlay Network, you still need to define an Overlay Network address space as part of the initialization. Be sure to choose an address space that DOES NOT overlap with the Azure Virtual Network CIDR or remote network you plan on connecting to via IPsec VPN.

You will need to make changes to the VPC Routing Tables, add appropriate Security Group Rules and disable Source/Destination Check for the VNS3 controller instance.

Either add a route to an existing Route Table or create new.

Enter the remote subnet (our example uses 172.16.0.0/24) as the Destination, and the VNS3 controller instance ID as the Target. Click Save.

Next make sure the Route Table is associated with the appropriate Subnet where the Application Server instances are running (10.10.10.0/25 from our example on page 12). 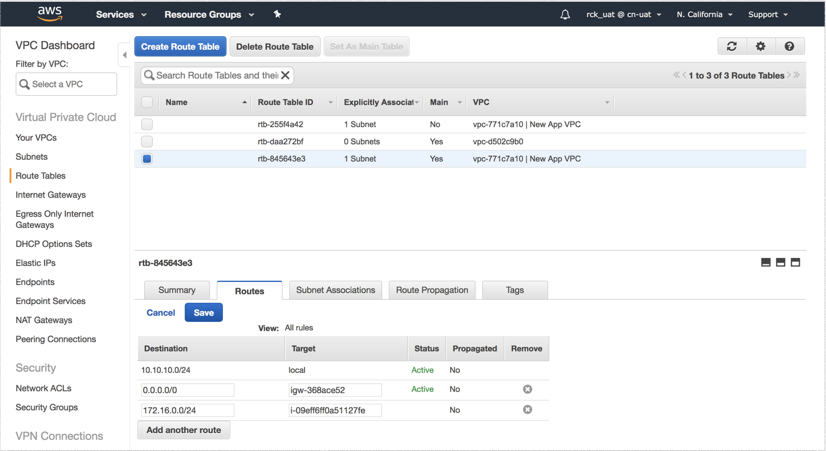 In order for the Application Server instances to send traffic through the VNS3 controller over the unencrypted VPC, Security Group rules need to be added to allow the traffic to flow.

As Security Groups are stateful, you only need to open Inbound rules in the direction of the initiating traffic as all response traffic will be allowed. 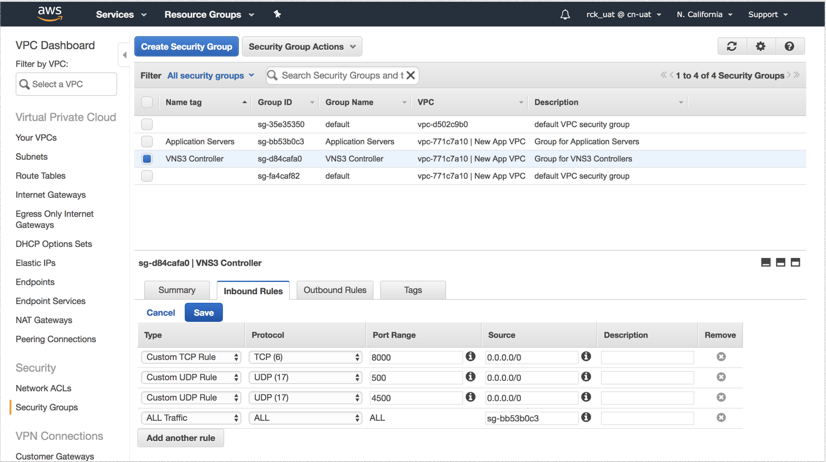 Once the Controller Instance is launched, you will need to disable the Source/Destination check on the instance. This step is required so the Controller instance is allowed to forward packets to the client servers. If this is not disabled the Controller will not be able to route traffic appropriately.

To Disable select the Controller Instance the click Instance Actions.